Three in every five 'law abiding citizens' committed a crime in the past year, according to Stephensons study

THE UK is a nation of ‘habitual petty law breakers’, according to a new study, as figures show nearly 60 per cent of UK adults admit to committing an offence in the past year.

In shocking statistics published by the national law firm, Stephensons, nearly three in every five respondents admitted to breaking one or more ‘everyday crimes’, despite 97 per cent insisting they were ‘law abiding citizens’.

Driving offences, including driving over the speed limit (35 per cent), eating or drinking at the wheel (21 per cent) and using a mobile phone while driving (10 per cent) were all in the top five results.

How do you compare? Take the Stephensons 2016 Crime Survey here 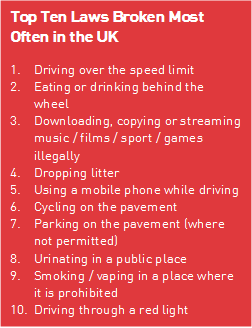 Others suggested that a lack of obvious victim to the crime was the key driver behind their breaking the law (47 per cent), while only 57 per cent admitted they had ‘no excuse’. Less than a third of respondents said they regretted breaking the law, while 39 per cent said they committed a crime because they believed they wouldn’t get caught.

Sean Joyce, Head of Regulatory and Criminal Justice at Stephensons said: “These findings show, that no matter how much we might like to believe otherwise, many of us are systematically breaking the law on a regular basis.

“While the majority of the crimes admitted to may seem ‘minor’ to most of us, the extent to which the rules of our society are being flouted on a regular basis means millions are running the risk of prosecution, fines and even a custodial sentence.

“Often, the fact that these ‘minor crimes’ are committed so often – and by so many – is seen as a justification, meaning the perpetrators rarely feel any sense of guilt or remorse associated with other more ‘serious’ crimes.”

Over the last 12 months staff from across the firm have been fundraising for our Charity of the Year, Macmillan Cancer Support - through a variety of activities we are proud to announce that we have raised just under £8,000 for this...

The national law firm, Stephensons, has announced its latest round of partner appointments with specialists from residential conveyancing , IT, regulatory law and probate joining the partnership. Natalie Bradley , Christopher Gath , Laura Hannah...

Ann Harrison, Chairwoman of the national law firm, Stephensons, is to retire at the end of April after almost three decades with the firm. Ann’s departure signals the start of a new chapter for the law firm as managing partner, Andrew Welch takes on...