Over seven million English school children are at risk of being exposed to asbestos, the deadly building material, according to new research by national law firm Stephensons. 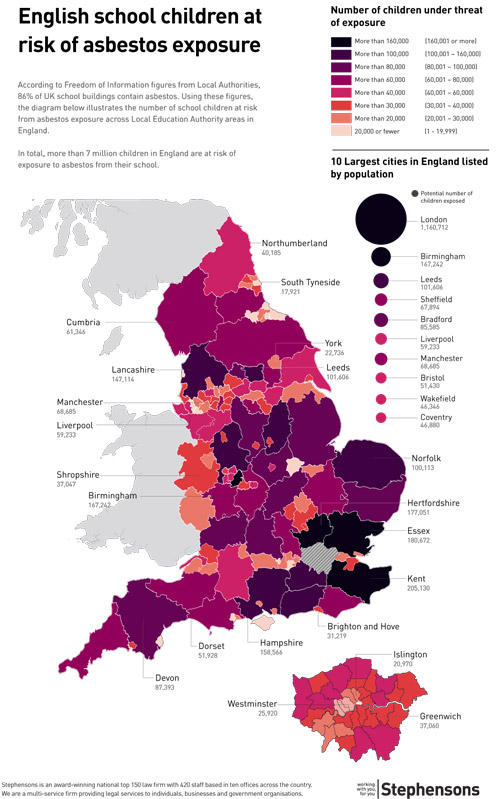 7,130,617 English school children are estimated to study in premises which harbour the deadly fibre, with around 86 per cent of all schools containing asbestos. Currently, there is no requirement for a school to notify parents when asbestos is found in their buildings.

The Committee on Carcinogenicity (CoC) has stated that exposure of children to asbestos is likely to render them more vulnerable to developing mesothelioma, a form of cancer, than adults.

The effective management of asbestos in schools is essential as children are particularly vulnerable to developing mesothelioma after being exposed. Currently, 80 per cent of the school stock is beyond its shelf life, and a significant part of the school estate is in poor condition and insufficiently maintained.[2]

Problems with buildings where asbestos is present, such as roofs being damaged, rotten windows and damaged ceiling tiles, can allow asbestos fibres to be released. Asbestos can be disturbed simply by using drawing pins in the walls or disturbing contaminated dust on bookshelves.

When asbestos is disturbed, fibres are released into the air, becoming trapped in the lungs and leading to mesothelioma.

Asbestos exposure also causes asbestosis, an inflammatory condition affecting the lungs, which can cause shortness of breath, coughing, permanent lung damage and several other illnesses.

Kate Sweeney, Partner and personal injury solicitor at Stephensons said: “Many people still think that asbestos is only a threat to factory or trade workers and this simply isn’t the case. The deadly material has been used in all types of buildings since the 1950s and is still present in the majority of schools in the UK due to ageing stock. These figures are very concerning and the fact that parents have no right to be notified even more so.

"Asbestos can be easily disturbed with a simple pinprick of the wall when hanging up children’s artwork and have a long term effect on the health of anyone exposed.

"These findings make a clear case for parents to have better access to information on the measures being taken by local education authorities and schools to protect their children from asbestos exposure.”

The national law firm, Stephensons, is to move into new premises in St Helens. The firm will close its current office on Corporation Street in the town on Friday January 17th 2020 and move to a new purpose built office space in Century House on Hardshaw...

A national law firm is reporting family feuds that fuelled a tense ‘stressmas’ has led to an increase in wills being rewritten in the New Year. According to Stephensons Solicitors LLP early January is peak season for those taking drastic...

Foreword from Ann Harrison, Chairwoman of Stephensons Throughout the history of the firm, we have always recognised the talent of the women in our business. Chris Stephenson, the founder of the firm, was always very keen to encourage those returning...