War at the workplace as Brits 'battle for the beaches'

The modern workplace is revealed to be a rat’s nest of resentment and pent up anger as the UK’s workforce fights for their share of annual leave, often at the expense of their colleagues. 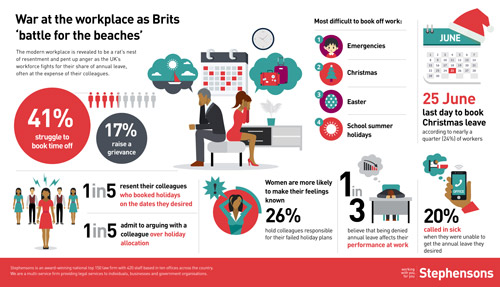 According to research by the national law firm Stephensons, a fifth (22%) of UK working adults resent their colleagues who have booked holidays on the dates they desired.

Female employees are more likely to feel bitter about missing out, as more than a quarter (26%) hold colleagues responsible for their failed holiday plans.

Emotions flare, as one in five admit to arguing with a colleague at work over holiday allocation. Women are even more likely to make their feelings known as a quarter surveyed said they have confronted a colleague.

More than one in seven surveyed (15%) said they had booked a specific day off after hearing of their colleagues’ plans to do so. One in ten (11%) has lied to get time off last minute, claiming they already had the days booked off and blaming an administrative error.

More than one in three UK workers have experienced difficulty when booking time off for emergencies. Whilst a fifth (20%) admit to taking a day off sick when they were unable to get the annual leave they desired.

Parents of young children (0-6) are more likely to resent a colleague (40%), blame an administrative error to get time off when they haven’t booked any (28%), take day off sick when not able to get annual leave (34%) than parents of any other age group of children.

A particularly high number of parents of younger children (children aged 0-6) agreed that parents should have priority in booking annual leave during school holidays (70%), whilst only 23% of colleagues without children agreed.

Worryingly, one in three of those polled believe that being denied annual leave affects their performance at work. Nearly half of working adults have found it difficult to book time off work (41%), yet only 17% raised a grievance with their employer over holidays and time off.

Philip Richardson, Head of Employment Law at Stephensons, said: “Annual leave is a topic of contention in many businesses. Unfortunately it is also an issue rarely discussed.

What we know is that people who are denied leave often go on to call in sick or experience a drop in productivity. It’s in the interest of the employer as well as the employee to ensure their place of work has a transparent and supportive annual leave practice and the issue is given full attention.

Employees who feel that they work in a caring culture and are allowed time to recharge, go on to report higher levels of satisfaction and teamwork.

It’s worrying to see the percentage of people who are negatively affected by their workplace’s annual leave policies in comparison to the relatively low number of grievances being raised by staff”.

The deadline for primary school admissions for the school year commencing in September 2022 will expire on the 15th January. A recent survey suggests 1 in 4 parents have ‘bent the rules’ to get their children into a better school. With the...

More people than ever before are now challenging Wills and making claims against estates . Coming into the new year, it is important to consider what provisions you have in place and whether everything you have implemented is still accurate, up to...

The national law firm, Stephensons, has appointed a new solicitor in its commercial litigation department. Winston Kan , a specialist dispute resolution solicitor , joins the firm from OGR Stock Denton LLP in London. In his role at Stephensons,...